One of the best ways to see New Zealand and Australia is by motorhome. But there are some subtle differences. In New Zealand, major destinations are rarely more than two or three hours apart but, in Australia, the distances between centres can be measured in days (with not much to look at in between).

It makes motorhome exploration in Australia time-consuming, and something of a challenge for those who are time-poor. The solution? Take a divide-and-conquer approach, otherwise known as the fly-drive holiday. Fly into, say, Cairns, and spend a week or two exploring North Queensland.

Perth also works well; fly there and take a couple of weeks travelling around the southwestern area and maybe taking a trip out to Kalgoorlie and back. It’s a technique I’ve used reasonably often, more for work-related reasons than recreational, but the same modus operandi applies.

Recently, I happened to be in Victoria for one RV-related assignment and subsequently spend a week at the second - the Campervan and Motorhome Club of Australia’s (CMCA) national rally at the Elmore Events Centre, a couple of hours north of Melbourne.

Measuring 6490mm in length, the Voyageur Deluxe is based on a Renault Master platform. It’s a little different to other Renault Master cab chassis because it has a low floor height, i.e. it is suitable for a motorhome because the platform chassis is front-wheel drive. Above the chassis, the body is built with an aluminium frame, and vacuum-bonded fibreglass composite is used for the walls and roof.

Inside, motorhome aluminium is used for the cabinetry framing. Like many motorhomes of this size with a low chassis, the capacity for external storage is limited, but there is one external bin on the nearside. It’s actually the under-seat area, but it’s large enough for hoses, power leads and camp chairs. Many rental motorhomes don’t come with an awning, but this one does - a Fiamma F45.

Powering the Voyageur Deluxe is a 2.3 110kW/350Nm engine and a 6-speed AMT gearbox. I found the gearbox a little better than Fiat’s in operation, but it took a while to get used to moving between the gears manually.

Yes, the 2.3-litre engine performed willingly enough, and the fuel consumption was about 11.0 l/100km, but I’m not exactly a leisurely driver. A bonus feature is a rear-view camera. I find such features useful and suspect they would also be a plus for anyone who isn’t used to driving motorhomes.

A benefit from a driver’s point of view is that the Voyageur Deluxe is a relatively short motorhome. That’s makes it easy to handle for city driving and manoeuvring around car parks and caravan parks. The downside is that something clever has to be done to get a practical interior fitout. In this case, that has been achieved by applying the European solution - installing a drop-down bed with a lounge area underneath - behind the driver’s cab, separated by a mid-wall habitation door.

That leaves the rear area for a kitchen and a full-width bathroom across the rear. To keep things airy and light in a relatively confined space, the colour scheme is beige and white. The interior height, at 2070mm, is reasonable although that drops down to 1770mm underneath the bed.

Below the floor, there are three storage compartments, one has the vehicle jacks and wheel-change gear; the other two are for items such as shoes and power leads. The LED lighting is touch-button-controlled and, once I’d figured out which button did what, it was all plain sailing. Overall, the lighting is well done.

With the bed raised, the lounge area is adequately spacious and features two inwards-facing lounges plus the two swivelled cab seats. Two people can comfortably sit around the table, certainly four at a pinch. For a solo traveller, it was excellent, and I was able to use the table for eating and as a desk.

There are power points, including one with USB hubs, fitted to the seat bases on both sides. I’m not a big fan of this location because of trailing leads, and I use a powerboard to minimise leads on the floor.

Setting up the 2000mm x 1400mm bed is reasonably straightforward. Remove the back cushions on both sides, lower the table a bit, undo the seat-belt-type clips and push the ‘down’ button on the bed switch. It lowers effortlessly. A small ladder is needed to get into bed easily.

For two, making up the bed is relatively easy because one person can stand on either side. The slightly odd aspect is that the curtains and pelmet are fitted to the underside of the bed, leaving the windows curtain-less when the bed is lowered. But there are integrated blinds and screens.

I’ve seen some drop-down bed designs with a shallow set of lockers under the bed. I know there are weight considerations and practicality issues, but that might help the storage issue in the front area. Bed lights are often noticeably lacking with drop-down beds, but the Voyageur Deluxe scores quite well here.

Downlights are fitted in the ceiling and under the base of the bed for when the bed is raised, but the light switch is located on the left-hand side of the bed base, making it easily accessible whether the bed is up or down.

In the kitchen bench area, there is a surprising amount of cupboard and drawer space, above and below. In my case, they were filled with the necessary plates, cutlery and cooking utensils. That did take up a fair amount of room, but by rationalising things a bit, I made more.

Adjacent to the kitchen bench is a full-height cupboard, which could be used as either food storage or as a wardrobe. Given that it’s a double-door arrangement, I did both, as storage in the Voyageur Deluxe is at a bit of a premium.

There are the expected appliances, of course, including a two-burner hob and round stainless-steel sink. The hob is fitted sideways, which is a bit of a space-saver, and the sink is a good size but doesn’t have a drainer. There’s no grill or separate oven, but a microwave oven is fitted above the Dometic 190 three-way fridge on the opposite side.

It’s handy to have a cupboard right by the habitation door, which can be used from inside or outside the motorhome. The lower cabinet does indeed fulfil that function and offers a bit of benchtop space while the upper cupboard has some of the electrics, including the touch-pad JControl and an AM/FM radio.

There’s also a handy 12V/USB hub charge point, but the only downside is that the charger leads need to be slightly longer than usual to reach the shelf area below. Fitted in between the upper and lower cupboards is a flat-screen TV that can be seen from both the front lounges and the lowered bed.

The Voyageur Deluxe is a small motorhome. But the bathroom is relatively spacious and has all the essentials - separate shower cubicle, Thetford cassette toilet and a vanity washbasin with a large mirror. Apart from the upper and lower cupboards, I did like the extra shelves fitted in around the loo area.

Rentals are usually fully equipped, but I often take along a few bits I find useful. For instance, a powerboard for the assorted chargers I carry around. Something like a Leatherman multi-tool is handy, as is a small torch and a couple of short lengths of wire (coat hanger and copper cable).

I find the latter useful for keeping windows and adjacent habitation doors open at the same time. Old-hand rental-motorhome travellers will also tell you that soft travel bags are better because they can be folded down and stashed somewhere. In the case of the Voyageur Deluxe, that was the storage compartment above the driver’s cab.

There are several rental motorhome options in the Let’s Go fleet but, for a couple or even a solo traveller, the Voyageur Deluxe provides that happy combination of a motorhome that isn’t oversized but still has enough space to provide for comfort. 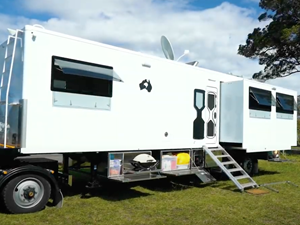