Bailey Caravans is a well-known manufacturer of both caravans and motorhomes in the UK. The British-built RVs are not unfamiliar to Kiwis, but over the past few years the Australian arm of Bailey has been producing a range of caravans that are better suited to Aussie outback conditions, which makes them well-equipped to travel in this country as well. 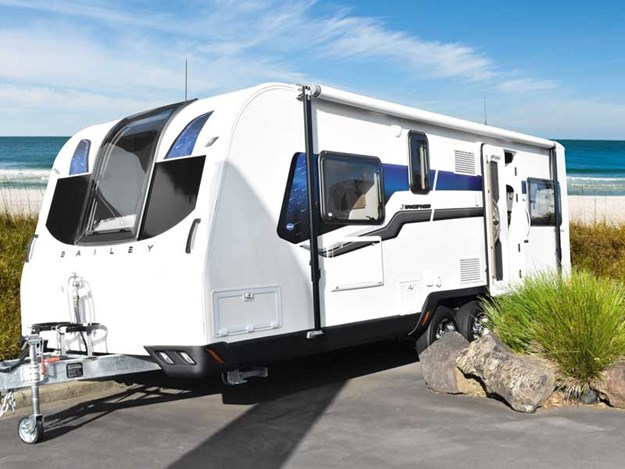 Unlike New Zealand, in Australia there are only a few European RV importers, but Bailey has the honour of being the first to undertake local manufacture there.

The Australian-made model has a completely different design and construction philosophy that reflects the Australian ‘build em tough’ mentality.  Back in NZ, TrailLite is the sole distributor for the Bailey Rangefinder caravan, and I borrowed a Rangefinder Capricorn for a run.

Bailey Australia have done a bit of work on the hot-dipped galvanised chassis. Instead of simply reproducing the standard Australian box section arrangement, the finite element analysis designed steelwork is a cross between an Australian and a European chassis, maintaining the essentials of strength and light weight.

Roller rocker leaf spring suspension is fitted to the tandem axles and, to give a nice even weight distribution, both water tanks are fitted above the axles. Up front, in addition to the standard ball coupling, jockey wheel and handbrake, two 9kg gas cylinders sit above the drawbar rails.

Above the chassis, the same design philosophy has been applied. The walls and roof are made from fibreglass sandwich panels which have a high-density polystyrene core. It’s all held together in an interlocked system of extruded aluminium called Alu-Tech to give a very rigid body structure.

A feature of note about this van; it has front and rear storage tunnels, with access doors on both sides. In addition, the aforementioned awning, a Dometic door and Polyplastic double-glazed windows complete the ensemble.

Up front is what might be called a skyview hatch in a motorhome, but this one actually extends almost down to mid-wall level. A slight problem with the rear nearside window is that being blocked by the awning arm, it cannot be opened unless the awning is rolled out.

Inside the Capricorn, which has a rear door entry, is quite a spacious layout which features an island bed up front adjacent to a split bathroom; a mid-area kitchen; and, in the rear, something to please many a Kiwi – a U-shaped lounge with windows all round. Having sat in my fair share of caravans, I have to say it’s one of better rear caravan sections I have seen.

Up front, the bedroom has a somewhat contemporary look. There are no overhead lockers; instead the front window and roof hatch take up all the middle wall/roof area.

Both the side wardrobes follow the curved front wall contours and, instead of bedside cabinets, both bed occupants get a little cubby hole at the base of the wardrobe which comes complete with a 230-volt mains power point and two USB charger points – plenty of space for the iPad and phone.

The bed measures 1930mm x 1530mm and, at its base, the offside bathroom wall area is a busy place. In the top third is the mounting point for a flat screen TV, along with power and antenna connections.

Fitting neatly into the mid-section is a handy wall mirror, while the lower area is the storage space for the freestanding table that fits into the rear lounge area when needed.

There are no real surprises in the bathroom area. On the offside is a good sized shower stall, with the expected variable height flexible shower rose. Facing that, the toilet cubicle is quite well laid out, with a Thetford cassette toilet, vanity washbasin and a reasonable amount of cupboard space.

Two rails and, not one, but two wall mirrors complete the picture. Although the bathroom is a split arrangement, it can be closed off from the rest of the van by fully opening the toilet door and sliding out the concertina curtain on the bedroom side.

The kitchen has to be the travelling chef’s dream. No minimalist Euro kitchens here; instead plenty of cupboard, drawer, overhead locker and benchtop space. It does of course come with the expected four-burner hob/grill/oven, large stainless-steel sink and an underbench microwave oven.

Although it looks quite classy, the square sink does seem on the large side and it’s not really good for water conservation. Facing the kitchen bench on the nearside is a Thetford two-door, 177-litre, three-way fridge.

It sits adjacent to a non-kitchen item hiding in the cupboard – a top loading 2.5kg washing machine. Above the washing machine, the shelf space and overhead locker are a handy niche for books, laptops and mobile phones when parked up.

Without the freestanding table, getting in and out of the U-shaped lounge is easy, and there’s lots of room for two to put their feet up or to seat four if needed. Above the seating, overhead lockers and corner shelving offer generous storage.

Under the seat nearest the habitation door you’ll find some of the electricals: the BMPRO Battery Plus 35SR battery management system. The touch pad control is fitted in the overhead locker.

If visitors or the grandchildren come along, the rear lounge can be made up into a 2200mm x 1480mm bed. That’s done by drawing out the concertina-style timber slatted base from under the mid-rear seat cushion to fill in the mid area, the side cushions being used for the mattress.

Since this van was designed in part for use in the Aussie outback, Kiwis enjoy the benefit too. The two 100AH deep-cycle batteries can be charged up by a 150-watt solar panel, and the 140-litre water tanks should give plenty of water capacity and grey water storage.

Australian vans normally come standard with an air-conditioner, as this one does, but a factory option is to remove the air-conditioner and install a gas heater instead.

At 7200mm long, Bailey’s Capricorn is quite a large van with plenty of interior space, but at the same time it isn’t excessively heavy. It is also an interesting cross between a European-built van and an Australian one, with benefits from both sides without too many of the disadvantages. I reckon the Capricorn has much to offer. 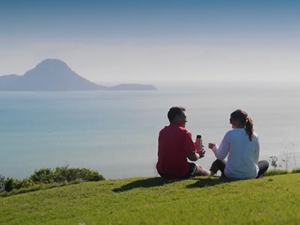